“As investors are looking for something to hold on to when deciding if they sell or buy a stock, oil has become the only important factor,” said John Plassard, senior equity-sales trader at Mirabaud Securities LLP in Geneva. “This week is more a wait-and-see mode. Investors are now looking for Fed’s minutes and they’re waiting for the start of the earnings season.”

The S&P 500 dropped 1 percent yesterday, leaving it little changed for the year amid concern global growth will remain sluggish. The gauge’s rebound from a nearly two-year low in February has shown signs of waning in tepid trading volume as investors consider whether efforts by central banks are potent enough to fend off slowing growth. Minutes from the Federal Reserve’s March meeting are due at 2 p.m. 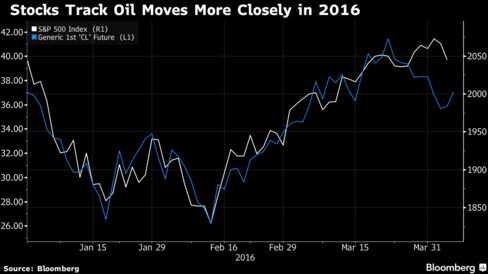 The Chicago Board Options Exchange Volatility Index, the measure of market turbulence known as the VIX, on Tuesday marked its biggest two-day gain in almost two months, rising from the lowest since August. The S&P 500’s drop yesterday ended a streak of 15 days without a 1 percent daily move, the longest such period of relative calm in more than a year.

Following Fed Chair Janet Yellen’s reiteration that future rate increases will be gradual, traders are pricing in no possibility of an April hike. December is now the first month with at least even odds of a boost in borrowing costs. Cleveland Fed President Loretta Mester is scheduled to speak about the economic outlook this afternoon.

Investors are also awaiting the earnings season for fresh evidence on the health of corporate America. Alcoa Inc. unofficially kicks off the reporting period when it releases first-quarter results on April 11. Analysts estimate profit at S&P 500 firms fell 9.5 percent during the period, compared with forecasts for flat earnings growth at the start of the year.