OPEC’s most senior official talked up Russia’s commitment to joining efforts to limit oil production even as the group’s internal disagreements over how to share the burden of cuts stood in the way of a global deal.

“We are confident of Russia’s commitments,” OPEC Secretary-General Mohammed Barkindo said in an interview with Bloomberg television in Istanbul on Wednesday. Although it’s still too early to assign countries individual output targets, “momentum is on our side” and Barkindo said he’s “very optimistic” that non-members will join a deal to reduce output.

Russia’s two largest oil producers said Tuesday they would comply with any government instructions to curb oil output, following President Vladimir Putin’s backing on Monday for a supply deal with the Organization of Petroleum Exporting Countries. That leaves the success or failure of an accord involving producers of half the world’s oil in the hands of an OPEC committee, which will meet later this month to resolve disputes over how much Venezuela and Iraq should pump.

Ministers from some of the largest oil-producing nations gathered in Turkey this week to discuss ways to end a two-year supply glut. With benchmark Brent crude trading at about $52 a barrel — less than half its price in mid-2014 — producers remain under severe economic pressure. After OPEC’s surprise reversal of its policy of pumping without constraints in Algiers last month, the group was seeking cooperation from other nations, in particular Russia. 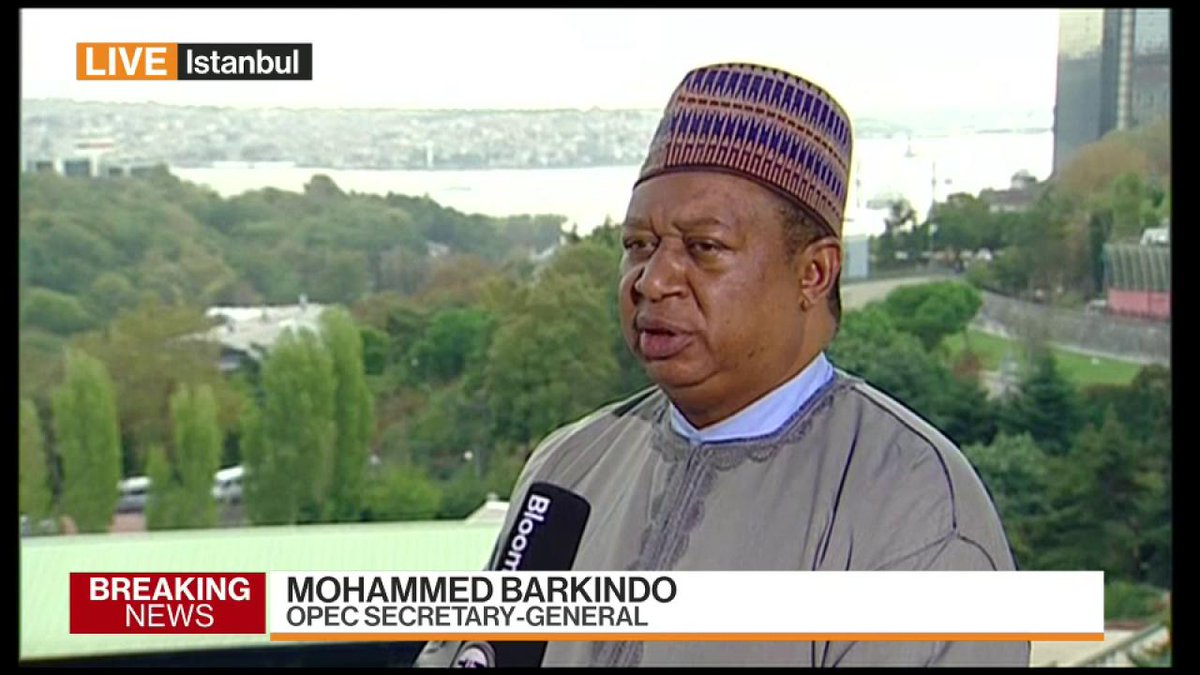 Saudi Arabia’s Energy and Industry Minister Khalid Al-Falih left Turkey on Tuesday before scheduled talks between OPEC producers and other nations outside the group. While countries including Russia, Azerbaijan, Algeria and Venezuela will still meet in Istanbul Wednesday to “compare notes,” according to Barkindo, most of the work was already done.
OPEC had already secured the backing of Putin, who said the world’s largest energy exporter was “ready to join in joint measures to limit output.” State-run Rosneft PJSC, Russia’s largest producer, said it will comply if the Kremlin decides to limit output, according to the TASS news agency. Lukoil PJSC, the second biggest, said all oil companies in the country would unify behind a deal to either freeze or cut.

Al-Falih and his Russian counterpart Alexander Novak reiterated a commitment to work together to improve the oil market and will meet again for further consultations in Riyadh later this month, according to an e-mailed statement from the Saudi Energy Ministry.

The details of how supply will be reduced need to be finalized by the group’s next meeting in Vienna on Nov. 30. Nigeria, Libya and Iran are exempt from making cuts because their production has been curtailed by violence or sanctions. A committee has been established to work out how other members will share the burden, meeting for the first time in Vienna on Oct. 28 to 29, Barkindo said.

OPEC’s internal disagreements have so far focused on an average of crude-production estimates from news organizations and other forecasters that appears in the group’s monthly report, commonly known as “secondary sources.” These data could determine the production target for each country when the Algiers accord is implemented, and Venezuela and Iraq have both argued the estimates are too low.

Before OPEC’s committee meets at the end of the month, Barkindo may travel to Baghdad for further discussions, he said on Tuesday.

“It’s more likely than ever that there will be some kind of cooperation between OPEC and non-OPEC,” Tamas Varga, an analyst at PVM Oil Associates Ltd. in London, said by phone. “Even if there’s an agreement that’s reached, the following three months after the agreement will be crucial, when we will actually see production figures.”

Previous agreements between OPEC and other producers didn’t fulfill their promise, said Hasan Qabazard, who was the exporter group’s head of research from 2006 to 2013.