Risk Rally Fades As Stocks, Oil Slip Back Into The Red 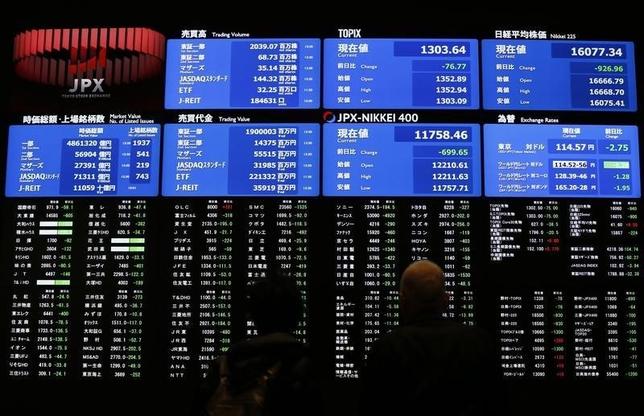 Visitors looks at an electronic board showing the Japan’s Nikkei average (top R) at the Tokyo Stock Exchange (TSE) in Tokyo, Japan, February 9, 2016.

The recent recovery in riskier assets fizzled out on Tuesday, with a fall in stocks, oil and the value of China’s yuan currency boosting investor demand for safer assets such as the Japanese yen, government bonds and gold.

Oil fell more than 2 percent and the main European stock indices fell as much as 1 percent, giving back some of their recent gains: oil rose more than 5 percent on Monday and world stocks recorded their biggest rise last week since early October.

Sterling recovered from its seven-year low against the dollar struck on Monday but struggled to make much headway as uncertainty over Britain’s membership of the European Union continued to swirl ahead of the June 23 referendum.

“Today though, European markets look to pull back from those gains, alongside a dip in oil as China stocks fall and mining giant BHP Billiton slashes its dividend.”

The world’s biggest miner announced a $5.67 billion net loss in the six months to the end of December, its first loss in 16 years, and said it would slash its interim dividend by 75 percent.

Its shares were down 4 percent (BLT.L) in London, helping to pull the FTSE 100 down 0.9 percent .FTSE. Among the biggest losers was Standard Chartered, whose shares were down 5 percent after the emerging market-exposed bank reported an 84 percent fall in annual profit.

Chinese stocks .SSEC closed 0.9 percent lower, their biggest fall in three weeks, while U.S. futures pointed to a fall of around 0.2 percent on Wall Street ESc1.

oil markets jumped as much as 7 percent on Monday – and had rallied around 30 percent from their lows a month ago – as speculation about falling U.S. shale output fed the notion that crude prices may be bottoming after their 20-month collapse.

But they retreated on Tuesday on concern that any cuts to U.S. production may be countered by rising output from Iran.

The pound hit a seven-year low of $1.4057 on Monday, after London Mayor Boris Johnson, one of the country’s most popular ruling party politicians, announced his support for Britain to leave the EU in June’s referendum.

“The 30-year low is $1.373 seen in June 2001, so the whole ‘Brexit’ discussion is pushing us against what has been a well held level at around $1.40 that sterling has bounced off several times over the last three decades,” said Jim Reid, market strategist at Deutsche Bank.

The euro EUR= also fell to $1.10035 on Monday, its lowest in almost three weeks, on fears Brexit could undermine the European project. It recovered to $1.1033 on Tuesday.

Investors’ shift towards safer ground on Tuesday pushed the dollar lower against the yen, down almost 1 percent on the day back below 112 yen JPY=.

The dollar’s index against a basket of six major currencies .DXY hit a three-week high of 97.60 on Monday but slipped back to 97.28 on Tuesday. This retreat helped lift gold 0.6 percent to $1,215 an ounce XAU=.

The benchmark 10-year Treasury yield was down slightly at 1.75 percent US10YT=RR.