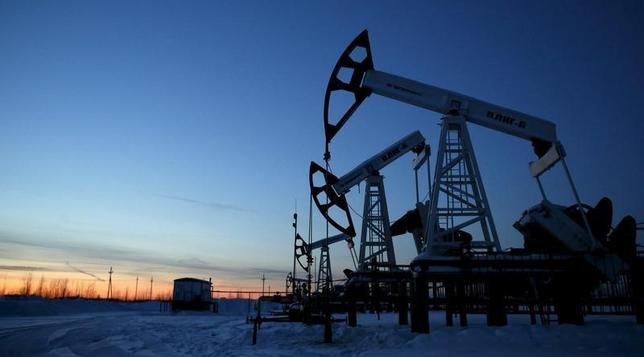 Pump jacks are seen at the Lukoil company owned Imilorskoye oil field, as the sun sets, outside the West Siberian city of Kogalym, Russia, January 25, 2016.

Crude oil prices pushed higher on Wednesday after Iran said it was open to cooperation with Saudi Arabia, partly recovering from an 8 percent fall in the previous session on concerns over demand and weak equities.

Liquidity in Asia remained low as China is closed all week due to the Lunar New Year holiday, while South Korea was also off on Wednesday and Japan will take a public holiday on Thursday.

Prices were supported by comments from Iran’s oil minister that Tehran is ready to negotiate with Saudi Arabia over the current conditions in global oil markets.

Meanwhile, the International Energy Agency (IEA) said the Organization of Petroleum Exporting Countries (OPEC) is unlikely to cut a deal with other producers to reduce ballooning output. It predicted the world will store unwanted oil for most of 2016 as declines in U.S. oil output take time.

“Another day of heightened volatility is expected as concerns over global growth prospects remain elevated,” analysts at ANZ said in a note.

Seeking protection against wild swings in prices, oil traders have scrambled to scoop up options, sending a key volatility index CLATMIV to its highest level since the worst of the global economic crisis in 2008, data showed.

Weighing on the general outlook for oil prices is a global demand growth slowdown. The U.S. Energy Information Administration (EIA) this week cut its 2016 world oil demand growth forecast by 180,000 bpd, with demand to hit 95.02 million bpd, up 1.24 million bpd from 2015.

Top oil merchant Vitol stated this week that it expected a slowdown in global oil demand growth from 1.6 million bpd last year to 800,000 to 1 million bpd in 2016.