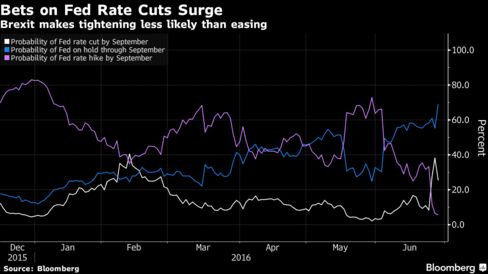 Traders, who have consistently been better at projecting the path of interest rates than the Fed itself, are now pricing in a greater probability that policy makers will cut rates in upcoming meetings than raise them. They don’t assign more than a 50 percent chance of an increase until the beginning of 2018, and don’t price in a full rate hike until the final quarter of the year.

The sea change in outlook for central bank policy comes after global equities and commodities plunged while government bonds and the dollar surged following Britain’s vote to quit the European Union. That’s tightened financial conditions in the world’s largest economy, driven down inflation expectations and dimmed the outlook for global growth.

“The market is pricing in a non-trivial probability of a Fed rate cut over the next couple of months,” said Aaron Kohli, a fixed-income strategist in New York at BMO Capital Markets, one of 23 primary dealers that trade with the central bank. “The Fed is really boxed in now, so the market doesn’t even begin to price in any real chance of hikes until mid-2017.”

For more on the outlook for central bank interest rate changes, click here.

The market’s view on the path of Fed policy is hardly set in stone. Rate hike expectations were upended in August and February amid similar bouts of market volatility.

Yet implied yields on federal funds futures, which settle upon expiration at the average effective fed-funds rate during the contract month, are now pricing in a real possibility of a rate cut by year end. The effective rate was 0.41 percent Monday, and is foreseen by traders averaging 0.35 percent in December.

Options on eurodollar futures, the world’s most actively traded money-market derivative, imply a 25 percent chance of a rate cut by September. That’s a reversal from just two months ago, when prices signaled that a rate increase by year end was a virtual certainty.

If the market’s dour outlook were to pan out, it would be reminiscent of 1998, when an Alan Greenspan-led Fed began cutting rates in September in response to market turmoil, before resuming hikes in June.

“The idea that they are more likely to cut than tighten in the next month or two I think makes sense given the backdrop, but I think as you go out, it starts shifting back the other way,” said Jim O’Sullivan, the Valhalla, New York-based chief U.S. economist at High Frequency Economics Ltd. “Obviously there is uncertainty about how much fallout there is from Brexit — are we out of the woods on that yet, or do the markets continue to tumble?”

Fed Chair Janet Yellen canceled plans to attend the European Central Bank’s forum on central banking in Sintra, Portugal, this week to return to Washington, a sign U.S. policy makers are on high alert amid financial market turmoil following the U.K.’s decision to leave the EU. The Fed said June 24 that it was prepared to provide dollar liquidity through its existing swap lines with central banks to avert undue stress on global funding markets.

Treasury yields have fallen in part due to safe-haven demand for U.S. assets. Benchmark 10-year Treasuries pay just 1.47 percent, near the all-time low of 1.379 percent reached in July 2012.

“You are not going to get any activity out of the Fed right now,” said James Camp, director of fixed-income at Eagle Asset Management, with about $30 billion in St. Petersburg, Florida. “They do not want financial conditions to tighten any further and they certainly don’t want to continue this dollar stampede.”