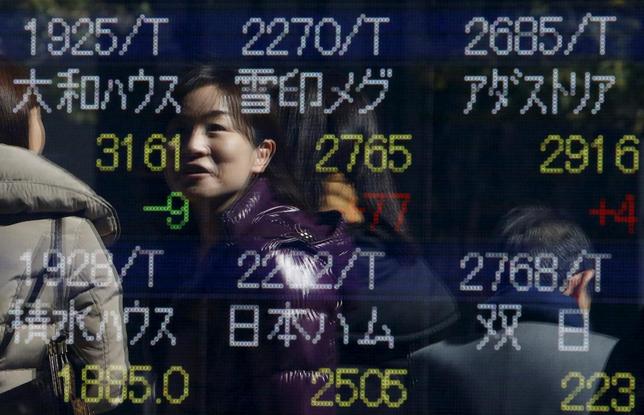 MSCI’s broadest index of Asia-Pacific shares outside Japan .MIAPJ0000PUS fell 0.3 percent, down 1.4 percent from its two-month high hit on Monday. Japan’s Nikkei .N225 ended the day down 0.8 percent, its lowest close in a week.

The overnight sharp slide in oil from recent lows also proved worrisome for investors although they showed some stability in Asian trade.

“Although oil prices have risen sharply from the trough, many investors are not yet convinced if things have improved that much and I suspect they judged now is a good time to sell,” said Tatsushi Maeno, managing director of Pine Bridge Investments.

“But I do believe that this year the global economy will prove better than last year,” he added.

U.S. stocks also ended near the day’s lows on Tuesday as energy shares tumbled, losing steam after hitting a two-month high on Friday.

U.S. crude, which fell 3.7 percent on Tuesday, also stabilized as doubts major exporters can coordinate an output freeze was offset by optimism that U.S. production will fall in 2017. It rose 0.5 percent to $36.68.

Also casting a shadow on markets, China’s February trade performance was far worse than economists had expected, with exports tumbling the most in over six years.

Exports dived 25.4 percent from a year earlier on depressed demand in all of China’s major markets, while imports slumped 13.8 percent, the 16th straight month of decline.

The data did not bode well for many companies that have relied on strong growth in the world’s second largest economy, with the energy and material sector at the top of the list.

Against this grim backdrop, assets that are perceived to be safe fared batter.

The 10-year U.S. Treasuries yield US10YT=RR fell back to 1.8497 percent, erasing its gains made after Friday’s payrolls data.

+That in turn dented the dollar’s attraction against other major currencies.

The dollar’s index against a basket of six major currencies .DXY =USD slipped to a two-week low of 96.887 on Tuesday. It eased back up to 97.385 on Wednesday.

The People’s Bank of China set the yuan’s midpoint rate CNY=SAEC at 6.5106 per dollar prior to market open, weaker than both the previous fix. The currency opened stronger at 6.5062 but has since weakened to 6.5147 CNY=CFXS.

The euro EUR=EBS rose to $1.1058 on Tuesday, it’s highest in more than a week. It has since eased to around $1.09795, down about 0.3 percent for the week, ahead of the European central Bank’s policy meeting on Thursday.

Financial markets expect the ECB to cut its deposit rate by at least 10 basis points and expand its asset-buying program. However, with so much already priced in, some traders are primed for a repeat of the sharp gains in the euro seen in December when the ECB’s measures fell short of market expectations.

Ahead of the ECB, the Bank of Canada will announce its policy decision later on Wednesday.

The Canadian dollar has rallied almost 10 percent from its 12-1/2-year low since the central bank surprised markets by not cutting rates at its last meeting on Jan 20.